Lord, Let Me Live So I Can Make You Proud Again

We are in dark times.  It is actually beyond frightening.  No matter what time of day, or what the situation, when I hear my youngest call for me, or when I am holding them, I cannot help but think of the mothers in Palestine, Syria, Columbia, America, who have been watching their children bleed. And it breaks me, because only there by the grace of God, it is not me - yet.

I don't want to judge.  It is not up to us to judge.  I feel that whatever it is that a person does, bringing harm to themselves, as per written in the Book, they will have up until the final hour to seek forgiveness and ask for redemption from God.  I don't believe that those who harm others fall into this category, nor those who protect those who do.  I'm not judging these sorts, I aim to steer clear.  But this is not really what this post is about.

Just after I wrote my last post, I went to lay on my bed, feeling deeply depressed.  I was worried about having war on US soil.  If I did not have children, I know I would feel differently.  But love changes everything.  So, I laid down, decided not to read one of my gazillion of books littering about my room but rather check out youtube for more depressing news (I kid).  I then came across this video from the ISS with actual pictures of niburu.

Now, I don't know if I would have become so excited about this had I not witnessed several strange things myself, in the sky this past summer.  Nevertheless, the video of the ISS feed, really brightened my day, because Lord knows, I'd sooner face a wrath beyond man's control than face more humans giving into their evil.

Something which struck a chord in me in the above video; the man talking at the beginning mentioned that many have been capturing photos of the second sun.  I've been sitting on two people's photo's taken simultaneously, without knowledge of the other, and one not even trying to capture anything at all save for a "cool sunset", the Sunday before Labor day of this year.  I will share them with you now. 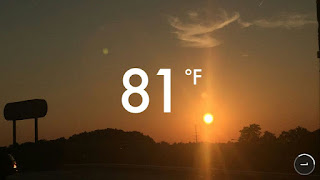 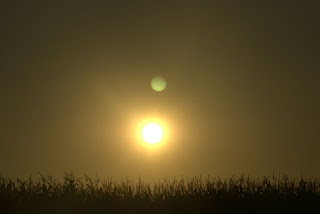 My girlfriend took this a few mins after my child received the above snapchat, thus around 7:20-22 pm (my text history could pinpoint exact time for she texted me with what she was seeing).  She is a semi professional photographer, and I believed I saw the second sun the previous Friday.  She, I don't know, possibly was out with her special cameras to prove me wrong, but captured this.  She has over 50 shots snapped between 7:15 - 7:35pm/ 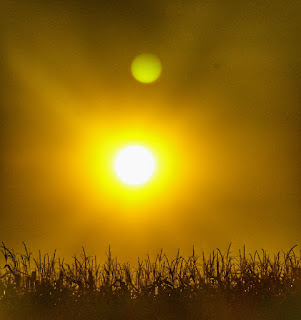 She said she took this with a different lens (I am not a professional though if anyone is interested can certainly connect you with her).  She said she couldn't believe what she was seeing and wanted to do all she could to prove it wasn't a flare. 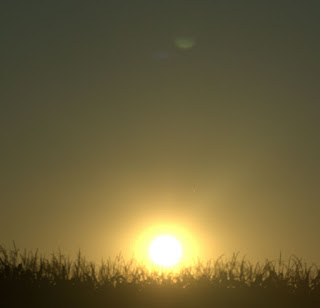 This was the very last pic she took that night.  It was the moment before the sun slipped away. Notice where the second sun, or planet or what ever it is, is (and yes I see a slight blue orb just below mystery object too).

Time to get right with God, and may peace be upon us.